The past week, I’ve listened to a dozen episodes of the podcast Jay & Miles X-Plain the X-Men — and I don’t even like the X-Men!

There are many podcasts that can be described as “two people talking about comics,” and this one puts most of them to shame. Co-hosts Jay Edidin and Miles Stokes are clearly having fun, and take this stuff seriously but not too seriously. (The illustration above is by Ming Doyle.)

I got hooked in part because first episode I listened to was about The Muir Island Saga, a storyline that included some of the first X-Men comics I read as a kid. I had been a DC kid with a special focus on the Legion of Super-Heroes, and I had dismissed the X-Men, for lack of a better critique, as “weird.” In hindsight, I know that one of those comics I browsed and discarded was from the Brood storyline by Chris Claremont and Paul Smith, which shows that elementary-school me was a dumbass.

Years later, when I was in high school, I picked up Uncanny X-Men #278, the first chapter of The Muir Island Saga, written by Claremont and penciled by Paul Smith(!). I would later develop a fondness for Smith’s work and pick up almost everything I could find of his, from X-Men to Dr. Strange to DC’s The Golden Age. But X-Men #278 was not good Paul Smith. He was doing a fill-in issue and was far-removed from his great run as the title’s regular artist. Claremont also was off his game here, about to be pushed out of writing the title he had been doing since 1976. 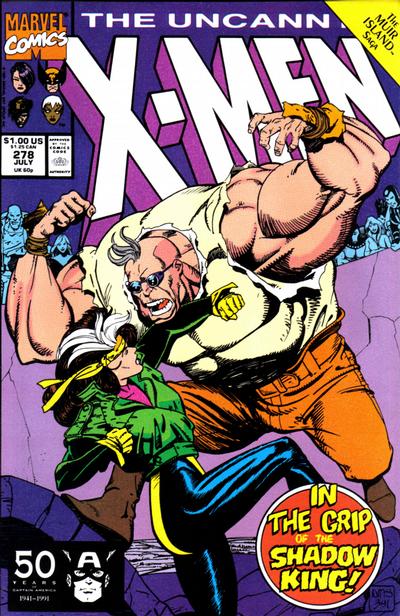 The Muir Island Saga marked a transition for the X-Men and related titles ahead of a major shakeup in the creative teams. The storyline was a wrap-up to Claremont’s long-running storylines, with the X-Men coming together to battle the Shadow King, a mind-controlling creature of psychic energy.

Despite its flaws, the story turned me into an X-Men reader for the next four or five years. Some of those comics were good. Many were terrible. I hadn’t thought about them in a long time.

Jay & Miles X-Plain the X-Men feels like it was crafted for me. The production value is second to none. The hosts and their producers are great at their jobs and give the whole thing a warm, engaging feel. They go through the comics with an obsessive level of detail, and pull no punches when the material is crap. It helps that the X-Men provide some great highs and lows from their publishing history.

I realize I am very late to the party with this podcast. I have seen it recommended many times. Now that I started listening, I have worked my way through most of the episodes about those comics that were formative for me.

Meanwhile, some other stuff:

• I was on War Rocket Ajax, another strong entry in the “two people talk about comics” podcast subgenre. It is an understatement to say this was a wide-ranging discussion. I had a lot of fun talking with hosts Matt Wilson and Chris Sims.

• Gregory Smith wrote about ‘Comic Shop’ for Pop Matters. This was a generous and thoughtful review, and I appreciate it.

• Abraham Riesman included ‘Comic Shop’ in his list of “8 Great Comics to Read this January” at Vulture.com. Thank you, sir!