FOR IMMEDIATE RELEASE
Award-winning journalist Dan Gearino takes a revealing look at comics’ direct market in COMIC SHOP: THE RETAIL MAVERICKS WHO GAVE US A NEW GEEK CULTURE, coming in October from Swallow Press, the trade imprint of Ohio University Press. The foreword is by Tom Spurgeon, editor of ComicsReporter.com and an Eisner Award winner.

COMIC SHOP is based on more than one hundred interviews, including innovative retailers such as Peter Birkemoe at The Beguiling in Toronto; Diamond Comic Distributors’ founder and owner Steve Geppi; and comics creators such as Richard and Wendy Pini, Mike Zeck, Jeff Smith and Bryan Lee O’Malley.

The tale begins in the 1960s, with a nascent fan culture that led to the opening of comic book specialty shops. From this start, a high school English teacher from Brooklyn named Phil Seuling came up with a new way to supply the shops with comics. His innovation in 1973 was a business model that has come to be called the direct market and survives to this day, despite long odds, booms and busts.

“There is no other business quite like a comic shop, with a nausea-inducing degree of difficulty and an array of colorful characters,” said Gearino. “The origin of the direct market is a story of creative people who turned passion into a business.”

Gearino, a business reporter for The Columbus Dispatch, shows how the comic shop business model turned out to be a boon for many cartoonists, helping up-and-coming creators find their audiences.

The crew at The Laughing Ogre includes Lauren McCallister and Gib Bickel.

The book explores the present-day landscape by spending a year with some of the best comic shops in the United States and Canada, with a spotlight on The Laughing Ogre in Columbus. The year turns out to be a rough one, covering parts of 2015 and 2016, when major publishers Marvel and DC went into a sales swoon, only for DC to recover with its “Rebirth” event. While big publishers lost ground in many shops, the gap largely was filled by new readers and smaller companies, with women and younger readers rising in visibility. 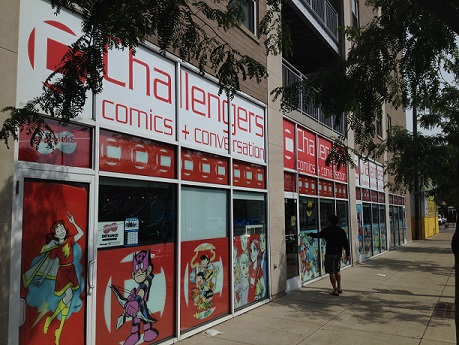 Challengers Comics and Conversation in Chicago

Also included are profiles of 40 notable shops in the United States and Canada, showing the many flavors of an iconoclastic business.

“Dan Gearino captures the genie in the bottle. He’s gathered together the players and the circumstances to reveal how a generation of entrepreneurs saved an entire industry and changed the very way people discover, buy, read, collect, and even think about comic books.” —Bud Plant

“If America’s castle on a hill rests on a foundation of how we buy and sell things, Dan Gearino shows us what’s in the basement.” —Tom Spurgeon, from his foreword