Bud Plant says he will not be a vendor at this year’s Comic-Con International in San Diego, marking the first time since the con’s debut in 1970 that he is not among the people selling.

“After 48 consecutive years of exhibiting at Comic-Con, I am not going to set up this year. I’ll be there walking the floor, looking for new sketchbooks and other products, catching up with publishers, seeing friends, and, well, scouting for Golden Age comics as I always find time to do. But after long and hard debate, we here (LaDonna, Anne and our usual assistants) decided we had enough of the complicated and labor-intensive logistics of setting up there,” he said in a Facebook post.

But don’t get the wrong impression. Bud is not retiring. He is still operating his mail-order book business, Bud’s Art Books, and putting out Bud Plant’s Incredible Catalog (PDF).

One of the best moments of working on my book was when Bud gave me a tour of his warehouse in Grass Valley, California, which is where I took the photo at the top of his this post. (Self-promotional note: He is a key person in the book, and is also selling copies of it that he signed.)

Bud has spent decades helping to sustain an audience for books that celebrate cartoon art, illustration and design. He also was on the leading edge of selling underground comix and importing the best material being published overseas.

The world of comics, and just the world in general, is a better place because of Bud and others in his generation who built something almost from scratch.

Here are some of my favorite images of Bud or related to Bud: 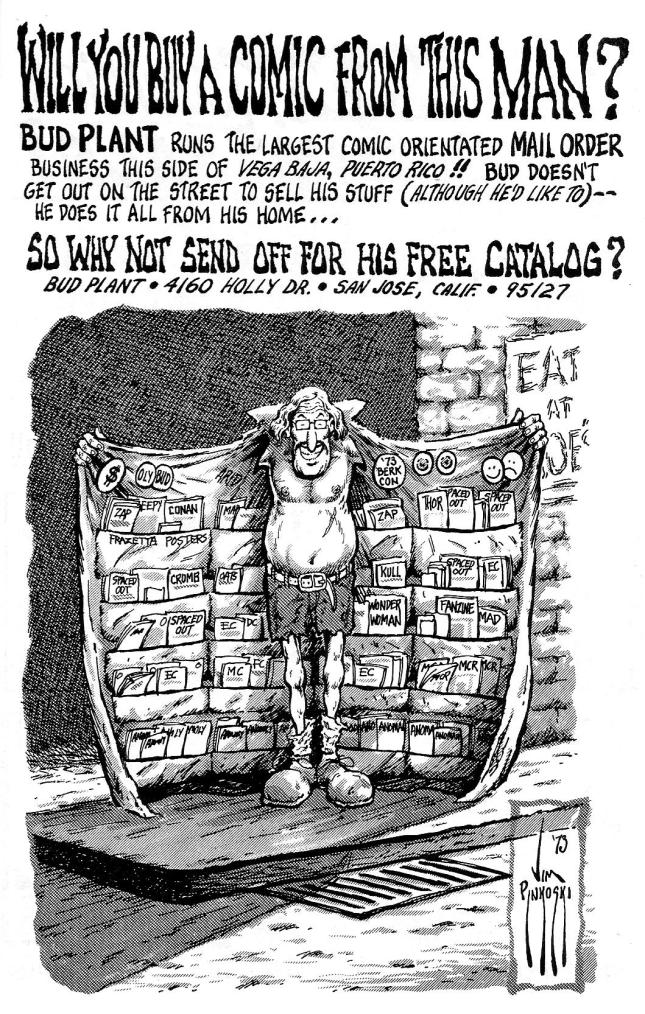 Jim Pinkoski drew this ad for Bud’s catalog, which appeared in the program for the 1973 Berkeley con.

In November, Joe Field hosted an event for my book in which he gathered some of the key people I interviewed for it. Here, Bud (middle) appears to be amused (or perhaps horrified) about something Brian Hibbs (right) is saying. To the left is the one and only Dick Swan. Here, we go back to the early-1970s, when Bud was in his early days as co-owner of Comics & Comix, the groundbreaking business he started with John Barrett and Robert Beerbohm. Photo by Clay Geerdes.