In 1979, a writer set out to compile a list of every comic book shop in the United States and Canada. He did so with the meager research tools available at the time, and the result is remarkable.

I would have loved to have had the National Comics Shop Register when I wrote my book. (Brief update on the book: The expanded paperback of COMIC SHOP is coming in May, and the listing is in the current Previews catalog. It includes a new epilogue I wrote last summer, among other additions. More on this in the coming weeks.)

The register is 13 pages of newsprint listing 439 businesses with addresses, names of key personnel and notes about what they sell.

I also should note that it was near impossible to put together a complete list. I’m sure there are shops from the era that are not listed.

Paging through it, I see some familiar names: Dick Swan and John Barrett of Comics & Comix in California, several locations of Geppi’s Comics World in Maryland, and Heroes World in New Jersey, among many others.

I see only two retailers who were running stores then and who are still doing so: Chuck Rozanski of Mile High Comics in Colorado and Joe Ferrara of Atlantis Fantasyworld in Santa Cruz. If anyone spots another who is still active, let me know. (Note: I added Ferrara here, after slapping myself on the forehead for not spotting him initially. I would pay to watch Chuck and Joe hang out and talk shop.)

Looking at stores in the Des Moines, Iowa, area, where I grew up, I see the Comiclogue, which existed until the late-1990s. That was where I bought Crisis on Infinite Earths #7, and picked up a bunch of the Red Circle relaunch from the early 1980s for 50 cents each. I was about 10 at the time, and it was the second comics specialty store I had ever seen after Four C’s Collector’s World, which also was in Des Moines.

One of the pleasures for me in reading the registry is seeing all the names of stores and people I didn’t know. It implies that there was a vibrant comics culture in much of the country and in Canada, a few years before comics retail hit what I see as its heyday.

I should note that Bishoff is broadly defining “comic shop” in his list, so he includes some businesses that specialize in back issues and collectibles, and do not sell new comics. Defining “comic shop” is always a challenge when trying to determine how many existed at a certain time, especially in the late-1970s, when the market was in one of its Wild West phases. 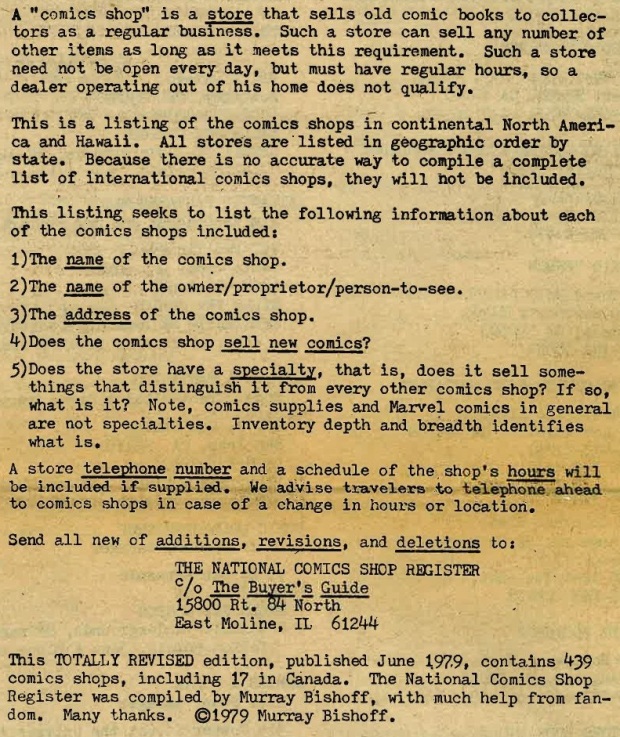 Bishoff left The Buyer’s Guide a few years after this and went to work for Jim Steranko’s publishing company.

Since 1988, he has worked work The Monett Times, a Missouri newspaper where he is news editor. I got in touch with him last weekend.

Here is some of what he had to say, via email:

What a treat that someone should remember a project that consumed an enormous amount of time and hardly generated much interest at the time. I often thought that if I had kept it up, I could have had a gold mine like Bob Overstreet’s Price Guide. After doing it twice, before the internet, mind you, it just didn’t seem to have a future, at least one that would bring me any reward. I still tried networking, listing an events calendar up to the end of my time with DynaPubs, where I included lists of comic conventions and clubs, along with science fiction conventions and clubs.

I saw them all interwoven, but at the time, few recognized that or encouraged my efforts. My life took a turn in 1982 when I went to work for Jim Steranko, then Alan Light sold The Buyer’s Guide.

That was all at the dawn of the private market. I’d like to think my efforts helped to fertilizer the ground for what became an industry of its own for decades.

As for me, I have been at The Monett Times now for 31 years. I will retire to write books in the summer of 2020. I have now appeared in three documentary films relating to ethnic changes in the southwest Missouri population. That latest, about “The Green Book,” is being released this weekend on the Smithsonian Channel.

Thanks for writing. What I treat for me to think all those earlier efforts have not been forgotten.

I learned of the existence of this list a few weeks ago when Bruce Chrislip, author of a fascinating history of minicomics, told me he came across it in an old issue of The Buyer’s Guide. He said he was thinning out his collection and wondered if I wanted it.

A thick envelope arrived a few days later. Thanks Bruce!